By Associated Professor Marianne Skovgaard Hansen, manager of The Inkubator at Cphbusiness Søerne.

The idea for Frank’s Toast came about when Arkim Ilazi had to come up with a business concept for the elective Entrepreneurship in the Marketing programme.

- One of my classmates, Frank, always brought toasts for lunch and everyone liked them so much that he started bringing more for the rest of us, and then I had the idea of a street food concept with Frank’s name, says Arkim Ilazi.

At a party at Cphbusiness, Arkim Ilazi met Corina Toudut, also a student in the marketing programme. Though none of them had any experience from the restaurant business, both quickly agreed that the idea for Franks’ Toast was great. They then teamed up to further develop the concept and were admitted to the Inkubator, Cphbusiness' start-up environment for entrepreneurs.

- The Inkubator gave us a better understanding of the business aspect and the importance of networking, explains Arkim Ilazi.

Arkim Ilazi and Corina Toudut decided that a business model on wheels was a good way to test their concept. They then bought a bike, which they brought along to Copenhagen Cooking & Food Festival, Street Food om Søerne, The Bridge Street Kitchen and Veras Market.

- It took us a while to find the right bike, but once we found it and decided which toasts we wanted to sell, we just had to start. We wanted to make toasts that taste just as great as the ones you remember from your childhood. Actually, better than that. Our mission from the start has been to make toasts delicious again, says Arkim Ilazi. 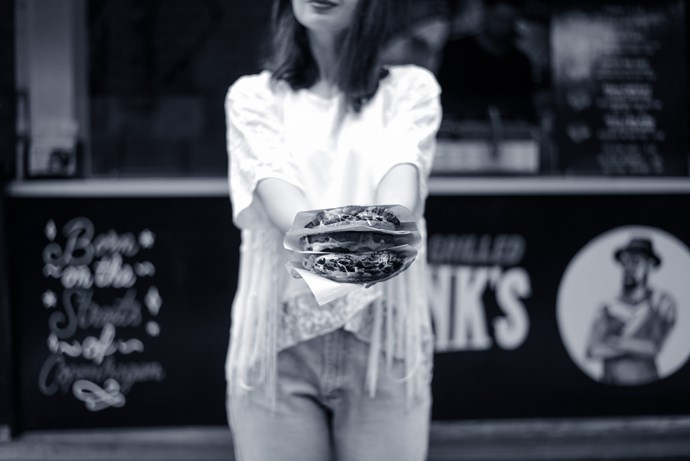 Toasts for the people

Despite their lack of experience in the industry and with a business model only a few months old, Franks Toastquickly became a success on the Copenhagen street food scene.

- We had our preparatory work well because Franks Toast started as an assignment with thorough research. We knew people loved toasts. Still, we weren't prepared for the success. The first we attend an event, we sold out in an hour, says Arkim Ilazi.

Storage space on the bike, however, was minimal, which limited the number of toasts for sale, but Arkim Ilazi and Corina Toudut were very aware of not wanting to compromise their product.

- The quality of the bread and the ingredients are the secrets behind our success. It means everything. We make everything from scratch in a professional kitchen. We prepare what we can from home, but we collect the different ingredients in the toasts and grill them just before serving them, so our customers get a delicious, warm toast and also get to see how it is prepared, says Arkim Ilazi.

Corina also made the company's signature sauce, which is used in all toasts.

- It’s our secret sauce and it is made from a secret recipe, she laughs.

According to Franks' Toast, the bike has been a great way to introduce a new food concept. But as the need for more space increased, the bike was sold in the Autumn of 2018. Arkim Ilazi and Corina Toudut, however, quickly got even more space, when they opened their first food stall in Tivoli in the Spring of 2019.

But running a toast business is no 9-5 job. It takes a lot of work to succeed.

- We did our internships in our own company. It is one of the great opportunities in the Marketing programme, and we also worked hard in the Inkubator and out in the field. We didn't just sell toasts off a bike. We also wanted to join events that matched Frank's Toast, and then we applied to join. It takes time to create a strong brand and that is exactly what we want to achieve with Frank's Toast, says Arkim Ilazi.

The teams' ambitions are very high and though they are still students at Cphbusiness while taking care of their business, they dream of opening a stall in Torvehallerne in Copenhagen no later than 2020 – and to have a location outside Denmark someday.

- I'm continuing my studies in the International Sales and Marketing programme and hope to use the programme to make Frank’s Toast even bigger and expand the concept abroad. We want the rest of the world eating toasts as well, Arkim Ilazi laughs.