The company Novorésumé celebrates its fifth anniversary this year. The founders got to know each other in the Friday bar at Cphbusiness and developed the company in the entrepreneurial community Inkubatoren. Today, Novorésumé has helped more than five million people apply for jobs.

When three international students met in 2013 in the Friday bar at Cphbusiness Lyngby, it was the start of an entrepreneurial adventure.

Andrei-Iulian Kurtuy, Letai Daniel Christian and Stefan Polexe, who each studied at Cphbusiness, quickly became good friends, and in 2016 they founded the company Novorésumé, which helps jobseekers with effective applications and CVs.

Today, five years later, the three entrepreneurs are still running the company, which has grown steadily since the beginning in Cphbusiness’ entrepreneurial community Inkubatoren.

- It is going well. In fact, so good that today we have helped more than 5.5 million people with their job search. We have users from all over the world, and just last year we hired four new full-time employees in the company, says 27-year-old Andrei-Iulian Kurtuy, who is a graduate from the AP Degree programme in Service, Hospitality and Tourism Management and the Top-up Bachelor’s Degree in Innovation and Entrepreneurship.

Novorésumé offers professional CV and application templates for job seekers. The templates have been developed in collaboration with graphic designers, employers and HR experts.

Students at Cphbusiness is offered a one-year premium membership for free at Novorésumé if they create a profile with their Cphbusiness email.

Visit the company and read more at novoresume.com here:

From the beginning, the three Romanian boys behind Novorésumé dreamed that the company would be successful. But earning and growth were not the primary focus, says Andrei-Iulian Kurtuy.

- We knew how difficult it can be to apply for a job and make a great CV. Therefore, we would use our skills to help people and at the same time again experience in starting our own business, he says and continues:

We quickly noticed that we were doing something right. There was a lot of positive feedback, and during the first six months, 120,000 people had used our product.
Andrei-Iulian Kurtuy
Founder
Novorésumé

The early success made the entrepreneurs want more, and they developed a premium version of Novorésumé, where users pay for extra options.

The premium version was developed in close collaboration with the users, and Novorésumé’s dialogue with the users is one of the biggest reasons for the company’s growth, says Andrei-Iulian Kurtuy.

- We have a strong focus on our users’ wishes, and we often ask about their needs and what they are willing to pay for. That dialogue has been important to us throughout. We find that users are really happy with our product and recommend it to family and friends, he says.

In 2021, Novorésumé moved into a new office space in Vesterbro in Copenhagen. Much has happened since the time of Inkubatoren, which Andrei-Iulian Kurtuy fondly remembers.

- It was a great opportunity to start up in Inkubatoren, and we benefited greatly from the sparring and community with the other entrepreneurs, says Andrei-Iulian Kurtuy, who looks forward to continuing Novorésumés development.

- Last year we translated our website and products from English to Danish, Spanish and German, which made us bigger in those markets. We want to translate into even more languages, and we continuously update our products in line with developments in the job market.

Novorésumé started in Inkubatoren, which is Cphbusiness’ office community for start-up companies. Here, entrepreneurs can e.g.: 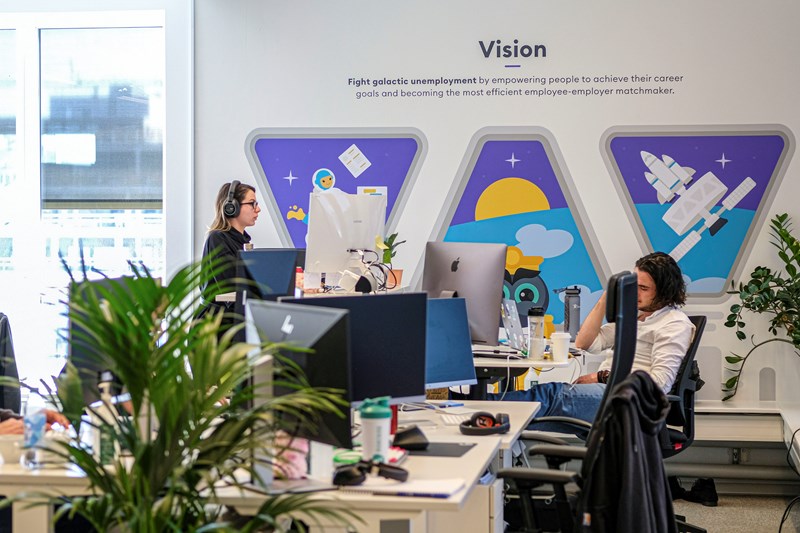 Since the start-up in Inkubatoren at Cphbusiness, Novorésumé has moved into new office premises in Vesterbro in Copenhagen, where the company's 13 employees now have their daily routine.