Nikolai Hansen made the leap to one of the world’s best universities.

Nikolai Hansen is 26-years-old, studies international business at CBS og has just returned from Cambridge, Massachusetts in the US, where he has spent the last six months as an exchange student at one of the most traditional and well-renowned universities in the world, Harvard University.

However, Nikolai Hansen’s journey started almost 3 years ago, when he stepped through the doors at Cphbusiness with a letter of acceptance for the Service, Hospitality and Tourism Management programme in his hand. Back then, it wasn’t the dream of academic success and visits to prestigious universities that filled his head.

- I started at Cphbusiness, because it wanted something new in my life. I had worked as a purchaser in the fashion industry and with marketing at a hotel, but during a recession it is always hard to get by without an education. The service industry was appealing to me and therefore Service, Hospitality and Tourism Management was an obvious choice, says Nikolai Hansen.
Not afraid of hard work

Right from the start, Nikolai took his job as a student very seriously. So seriously, in fact, that his fellow students would often look on as Nikolai embarked on writing 10 pages of notes for a single class.

- When I started at Cphbusiness I wasn’t very academic, but I was very aware that I wanted something out of my education. I attended all the classes, always took a lot of notes for each class and developed my study technique, says Nikolai Hansen.

Even so, it wasn’t until he crossed paths with Robert Schønrock Nielsen, PhD in management and teacher at the Service, Hospitality and Tourism Management Programme, that Nikolai Hansen realised the potential hard work and a determined attitude could offer him. Through professional talks about subjects that often extended beyond the curriculum, the dream of his future studies was slowly shaped and made concrete.

A good dialog and the fact that you give students the opportunity to be ambitious about their own work is essential to the development of the students potential, Robert Schønrock Nielsen says.

- It is very important to me that I use the knowledge I get from my research in my daily teaching, so that it becomes possible to use it in practice. And also it is my experience that the students are able to understand far more complex material than they think themselves, opening a new perspective to the way they see the world.

Nikolai and Robert agree on the importance of teachers who take the extra time to guide and help students with high ambitions, who want to know a little more than is found in the standard curriculum.

- My focus quickly shifted to subjects such as philosophy, knowledge sharing and other subjects outside the standard curriculum. If you have the will, the abilities and the desire, you will get the chance to do something with it, Nikolai Hansen says.

- Through my conversations with Nikolai I found that he was very ambitious. It is important when dealing with students who are hungry for knowledge that you give them the opportunity to take on new material. In Nikolai’s final paper on the Service, Hospitality and Tourism Management Programme there were references to both a Nobel Prize winner in economics as well as a series of hard to grasp philosophers, Robert Schønrock Nielsen says.

Gradual development was the key to succes

- I would never have gotten to where I am today, if I hadn’t started at Cphbusiness. If I had started directly at CBS, I would have failed miserably right from the start.

I would never have gotten to where I am today, if I hadn’t started at Cphbusiness.

Nikolai Hansen does not hesitate to underline the importance of taking it one step at the time and developing oneself gradually. His time at Cphbusiness was essential in adapting to life as a student; learning study techniques and getting input and guidance from teachers was essential to his later success.

- I was shaped at Cphbusiness. I learned about study techniques and made it part of my way of thinking. It was a good way to start an education, especially when you have been away from school for a long time, Nikolai says.

It's not all fun and games

It doesn’t matter to Nikolai if you only get an AP degree, include a Top-Up at Cphbusiness or get something else altogether. The important thing is that you have the right attitude and realise that you actually can use your education as a stepping stone to other things.

- I think that my main point is that, as a student, you have to know that you can use your education to get ahead and get far, if that is what you want, Nikolai Hansen says.

If he has to give a piece of good advice to others, who want to follow in his footsteps, Nikolai Hansen has no doubts about what it is, even though nothing hurts like the truth.

- Saying that you have to work for something is a bit of a cliché, but in the end hard work is what it takes. It isn’t very nice to hear, but school cannot always be fun, especially when you sit for 18 hours straight studying for an exam, Nikolai Hansen says.

The importance of spotting the talent

- As a teacher, it is important that you can spot the students’ individual talents. As teachers and as an educational institution, we have focus on spotting the students with an academic or entrepreneurial talent, Robert Schønrock Nielsen says and continues:

- It is all about co-creation. When you explore subjects together, both students and teachers get smarter. It creates sort of a perpetual circle.

A future in USA

His stay at Harvard was such a success that Nikolai is already preparing for his next trip to the American university in the summer of 2015. In the long run, USA will in all likelihood also be place for his future career.

- It is generally said that students at International Business at CBS either want to be investment bankers or management consultants. No matter what I choose, I want to try out a lot of different industries and work in a lot of different countries, but doing a phD for a company is certainly also a possibility, Nikolai Hansen concludes.

As a teacher, Robert Schønrock Nielsen is very proud that Cphbusiness as an educational institution for the first time has produced a student for Harvard.

- It is my hope that Nikolai can serve as an inspiration to other students, who now realise that anything is possible if you have the will and the desire.

Nikolai Hansen and Robert Schønrock Nielsen still keep in contact and collaborate on articles about a green transition in the hotel industry and the development of new management tools in organisations. 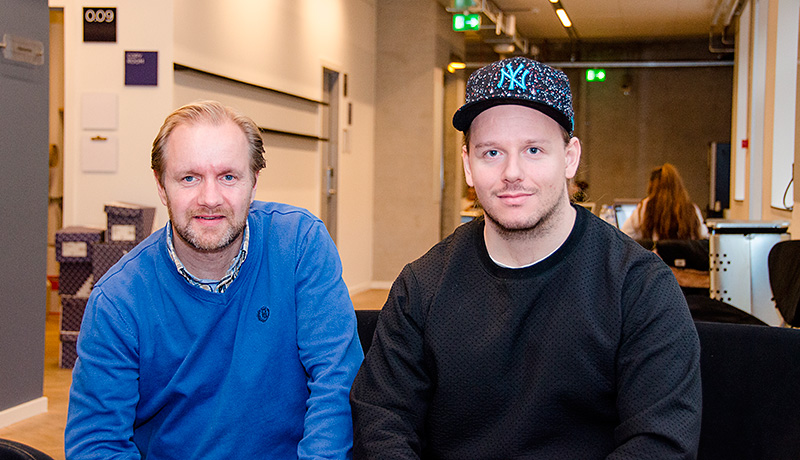