225,000 Danish kroner found new owners on Thursday, 10 September 2015, when the Carl Løbnitz Krebs and Spouse foundation gave the last grants at the incubator at Cphbusiness Søerne.

- It means a lot. You might dare more, 'cause if you had lent the money and failed, you would be in debt. So the money makes a real difference, says Casper Pade, founder of Clean Sneaks. He is going to use the 50.000 Danish kroner to enter the British market.

- If you don't have family to borrow from, it's difficult to find that kind of money, he says and explains that there are few investors for those amounts.

He sells sustainable candles through his business Kandl. The supply chain is important, and half of the money is going into visiting suppliers in Equador.

Should make a difference

The Carl Løbnitz Krebs and Spouse foundation hasn't given out money for a few years, explains Jakob Henningsen, administrator of the foundation.

The foundation was set up with the purpose of “offering assistance to young men and women between the age of 20 and 30 for education within the area of trade, including help for traveling and starting a business”.

During the years, the grants have been handed out in portions of 10,000 Danish kroner for young people at business schools. Over time, the foundation has diminished in size and it was time to hand out the final funds. Therefore, the grants for Cphbusiness’ students were the last to be handed out by the foundation.

The foundation has not been managed by a board, so it was Jakob Henningsen, who made the decision to focus on Cphbusiness’ students. He believes that they are the closest match for a modern interpretation of the foundation’s original target group and they have not disappointed.

- It has been very interesting to read the entrepreneur’s applications. It is life affirming to see someone passionate about entrepreneurship, says Jakob Henningsen.

If you ask Jakob Henningsen, handing out grants is all about making a difference, and he believes that it should be easier to start your own business in Denmark. You shouldn’t get a letter from SKAT about missing payments, instead you should be congratulated as a new business owner, says Jakob Henningsen.

Marie Helles works with innovation and entrepreneurship at Cphbusiness, and she is glad to see that the foundation has received applications from more than 30 applicants – some of which she did not know beforehand.

- It shows that we have a group of students at Cphbusiness who is thriving. There are a couple of students, we did not know about, says Marie Helles.

She explains that for the same reason Cphbusiness is starting a project to identify entrepreneurs at Cphbusiness’ different study programmes and helping them to get started.

Among the recipients were: 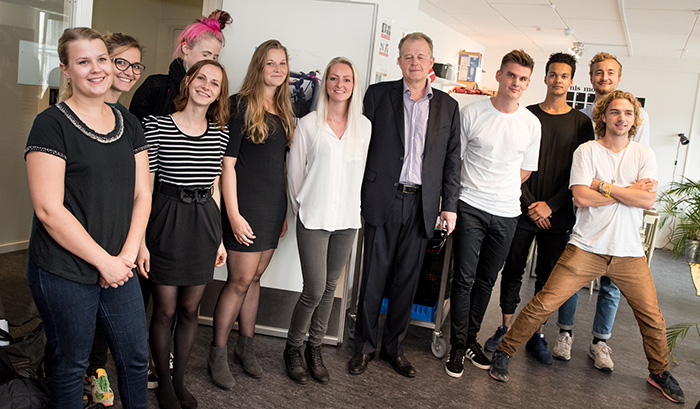