Aasted ApS from Farum won the title as Cphbusiness Internship of the Year 2016/2017 with an internship that gave intern Lasse Fonnesbek Drustrup great responsibility and the opportunity to develop.

- Obviously, we are very proud and very happy, says Piet Hoffmann Tæstensen, CEO at Aasted ApS that won Cphbusiness Internship of the Year 2016/2017 in a competition that includes 87 nominated internships.

Lasse Fonnesbek Drustrup, former intern and current employee at Aasted, nominated the company for the award. He is thrilled about winning Cphbusiness Internship of the Year and is happy to be able to highlight his place of internship.

- It is fantastic, and it is cool to have influence on enhancing a company that most people perhaps do not know, says Lasse Fonnesbek Drustrup who recently graduated from the Top-up Bachelor's degree in International Sales and Marketing at Cphbusiness.

Both Aasted and Lasse Fonnesbek Drustrup were the reason that Aasted was chosen as the best internship, tells Nikolaj Lubanski who is Director of Talent Attraction at Copenhagen Capacity and a part of the jury that selected the winner.

- It is the unique match. A brave company and a person in Lasse who grabs the opportunity and lives it out, says Nikolaj Lubanski. 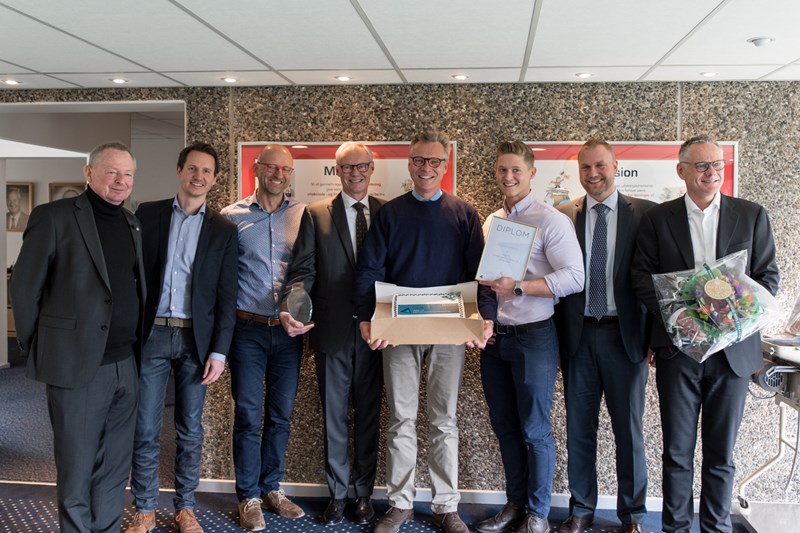 Aasted ApS was surprised with diploma, statuette and cake when the company won the prize Cphbusiness Internship of the Year 2016/2017.

An amazing journey from day one

- It has been an amazing journey from day one of my internship. To make it all the way to the final with four super qualified candidates - and then win it. It is great, says Lasse Fonnesbek Drustrup.

- It was a hard choice. They are all very impressive.

Nikolaj Lubanski, member of the jury

Like 86 other students, he nominated his internship for Cphbusiness Internship of the Year. Aasted won in front of the four other finalists Azets, Debitoor, Nordea Lyngby and The Roger Smith Hotel in New York.

- Aasted has been very brave and has given Lasse the opportunity to test himself in tasks that are way beyond what you expect from a regular internship. To give him the opportunity to present marketing plans and strategies to the executives and the international sales team is a strong move by the company. Lasse grabbed the opportunity he was given and has grown because of that, says Nikolaj Lubanski.

An intern ready to seize new opportunities is a description that Aasted recognizes.

- It's fairly quick and easy to spot if a person is willing and able. And in this case we sensed eagerness, an appetite and abilities from day one. So we basically poured on. Poured on a lot, actually. And from that point, Lasse took it up and above by performing better than we had expected, says Piet Hoffmann Tæstensen.

Even though the internship at Aasted stood out, the internships at Azets, Debitoor, Nordea Lyngby and The Roger Smith Hotel also contributed immensely to the personal and professional development of their interns. Therefore, it took quite a while to decide on the final winner, explains Nikolaj Lubanski on behalf of the jury.

- It was a difficult decision. They were all very impressive. The thing that characterised the winner could be found in all five internships: If the intern got the tasks done quickly or proved to be more skilled than expected, the companies adjusted the tasks and provided new challenges for the intern to develop with them. On top of that, the companies all provided the interns with opportunities to utilise what they have learned during their studies, says Nikolaj Lubanski. 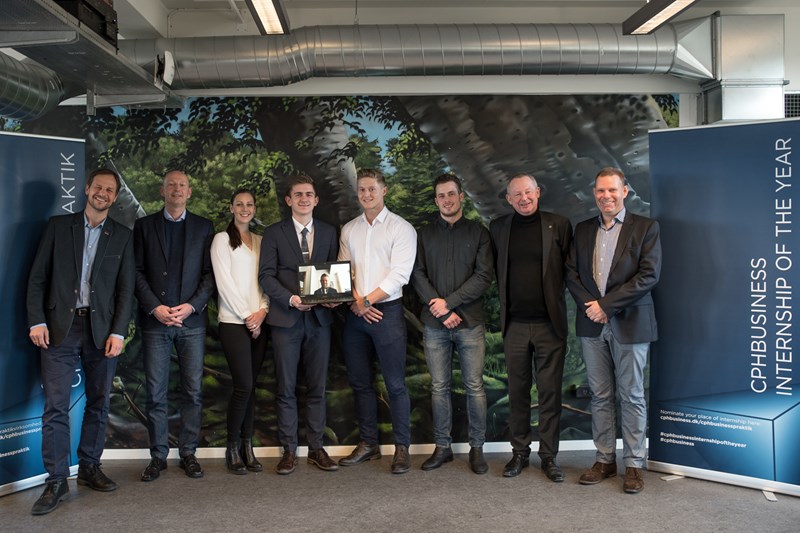 This year's five finalists and the jury.

The award is awarded for the third year in a row by Cphbusiness. The purpose is to shine a light on the importance of great internship stays during higher education study programmes.

The five nominated companies for Cphbusiness Internship of the Year were:

The jury consisted of:

Aasted in the final of Business Internship of the Year

The winner is selected by a jury consisting of: