Denmark’s best internship has been elected. American based Regal Boats and intern Rasmus Christensen from Copenhagen School of Design and Technology, KEA, won the title.

114 spectators sat on the edge of their seats in the Royal Danish Opera in Copenhagen on Tuesday 16 May, when it was decided which company had created the best internship. The winner was Regal Boats from Florida.

And they all did that in an impressive manner, but in the end a single winner had to be found. The winner was Rasmus Christensen who studied to become a production technologist and had achieved impressive results during his internship: Among other things, he increased the productivity by 40 percent.

Rasmus Christensen was a happy and proud, but also a surprised winner:

- I was sincerely surprised because the others' presentations were really great, and, like me, they had gained a lot from their internships. But I could really see what I had learned, and how much value I had created with that learning, and it is my impression that this is what the jury emphasized. I am very happy to give back – not only to Regal Boats, but also to my lecturers and Mette and Melanie, who helped me getting the visa, says Rasmus Christensen, who, like every fourth business academy student, has been offered a job at his internship company.

- The company gave him the opportunity to contribute. They gave him a specific case, and when he examined it, he saw that something in their processes could be done in a better way. In a typical Danish way, he told the management 'I think I can process optimize this'. And it is here the company is great because they allow him to do it. Just like they make up their mind on the things he finds out, they subsequently implement them. It is an involving internship. And Rasmus' approach was 'what can I do for them?' and not just what they could do for him, says Christine Antorini and elaborates:

- It is not just because his internship was in a foreign country, but if there is something we must be proud of, it is that we educate independently thinking individuals, and that makes Rasmus capable of working in a country where the culture is very different.

Rasmus Christensen's parents were also present in the Royal Danish Opera and saw their son being announced as the winner.

- They are happy because they know how much the academic pride means to me, to create results for the benefit of others, tells Rasmus Christensen. 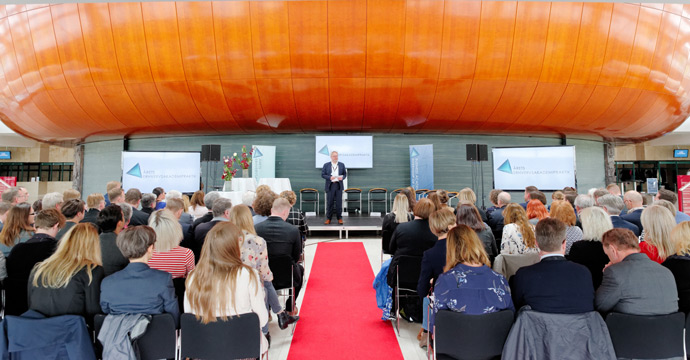 The Royal Danish Opera sat the scene for the Business Academy Internship of the Year 2017.

Focus on the good internship

The Business Academy Internship of the Year award is established in order to put focus on how the internship becomes a successful and rewarding experience for both the intern and the company.

In many cases, the internship is the admission ticket to the students' first job. Danish Business Academy estimates that one in four internships on the business academies leads to a job afterwards. Seven of the nine finalists have got a job at their internship company.