RentSafe ApS won the title as Cphbusiness Internship of the Year 2017/2018 due to, among other things, the company's ability to include Emil Buch as an equal employee.

- It is a great honor, especially for a small new company with great ambitions, says CEO of RentSafe ApS, Nadim Stub that won Cphbusiness Internship of the Year 2017/2018 - a competition that includes 72 nominated internships.

Emil Buch, former intern and current full-time Partner Growth Manager at RentSafe, nominated the company for the award. He is thrilled to be able to give something back to his place of internship.

- I nominated RentSafe for Cphbusiness Internship of the Year because I think it has been a fantastic internship that developed me both professionally and personally, says Emil Buch.

- I had the feeling of being part of the team - not just an intern. It has been a very unique experience and they gave me a lot of support. It was the whole picture that made me nominate RentSafe.

Both RentSafe and Emil Buch were the reason that RentSafe was chosen as the best internship this year, tells Ole Gram-Olesen, President of Cphbusiness and part of the jury that selected the winner.

- All our study programmes are completed by a mandatory internship and this is where things are tested, where our students must be challenged and test their learned skills in real life. Therefore, it is of utmost importance that the internship takes place in a company capable of challenging our students and maybe also willing to make use of the ideas suggested by the intern, says Ole Gram-Olesen.

We have more than 2,200 young people doing internships every year, 72 companies were nominated, five of these went through to the final. Our jury met these five young people yesterday, and Emil's presentation of his internship made a clear winner, says Ole Gram-Olesen. 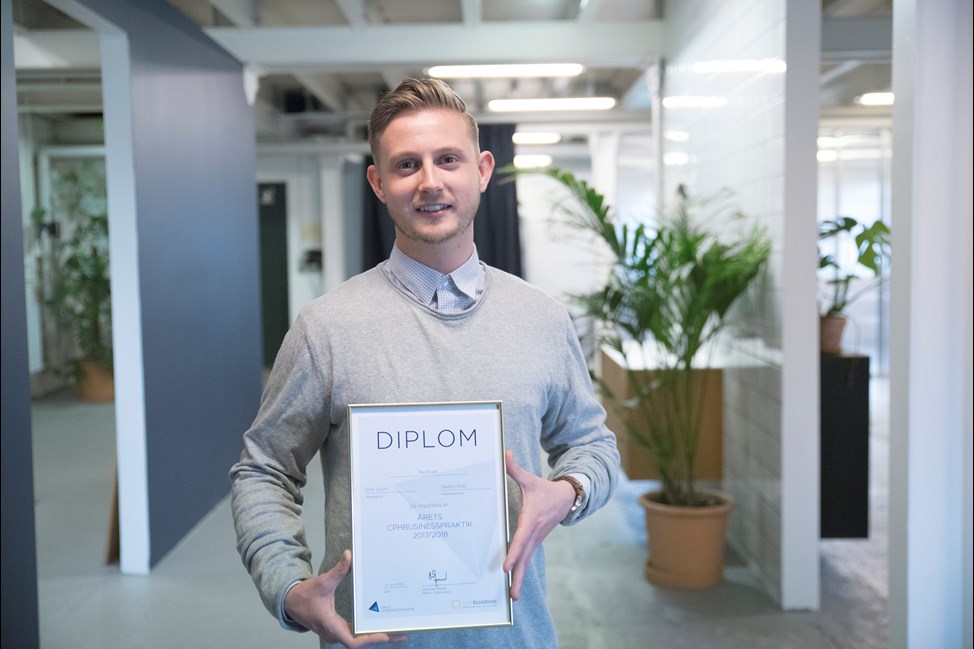 Emil Buch, newly graduated at the Top-up Bachelor's degree in Innovation and Entrepreneurship from Cphbusiness Lyngby, had, like 72 other students, nominated his internship for the best of the year.

He was one of the five finalists who presented their internship in front of the jury and at the end, his internship at RentSafe was named Cphbusiness Internship of the Year 2017/2018 - a title that brings joy and surprise at RentSafe.

- Being nominated is one thing, and you get pretty proud of that, but then winning, that really surprised me, says Peter H. Lange, CTO at RentSafe.

- Obviously, you aim for that, but we would never have imagined it happening this early on as a start-up business, so that is just really, really cool, adds Nadim Stub, CEO at RentSafe.

The award is awarded for the fourth year in a row by Cphbusiness. The purpose is to shine a light on the importance of great internships during higher education study programmes.

The five nominated companies for Cphbusiness Internship of the Year 2017/2018 were:

The jury consisted of:

RentSafe is in the final for Business Internship of the Year

The winner is selected by a jury consisting of: